Most Popular Gurudwara in Pakistan

Today, Sikhism, born on the subcontinent, and political philosophy, have significant roots in Pakistan. Sikhism is widely practiced in the Punjab of the two countries with a common border between India and Pakistan. Lahore, particularly its most considerable proportion of Pakistan's gurudwara and its associated Sikh populations, has been believed to be the bastion of Sikhs.

In Pakistan, most gurdwaras virtually invariably have identical architectural designs and layouts, no matter where they are located. This means unity and unity and provides Sikhs a sense of kinship, regardless of where they are. Some of Pakistan's best-known gurudwaras are:

Nankana sahib gurudwara is one of the holiest sites of Sikhs since it is located at Baba Guru Nanak Dev, the founder of Sikhism. It's also called the gurudwara Janam Asthan Sahib and is located in the district's town of Nankana under the same name. gurudwara in Pakistan Nankana sahib could be a spiritual destination for Sikhs, but it also has sentimental importance for people who routinely visit the area. In October 2019, prime minister Imran Khan founded the University of Nankana Sahib.

This huge gurudwara front lies approximately 75 kilometers from Lahore and is painted in pale yellow, and is two stories high with the white dome above it. These domes come from a floral basis and contain lotus symbols inverted from the Kalas stand or decorative finishes.

The layout is based in a rectangular orientation and is a mid-high, all-around gallery typical of most Sikh architectures. Aside from the entryway and the langar khana (where special food is made), the roof is uncovered and there is a white, dazzling marble flooring on the floor.

It is the most prominent gurudwara in Pakistan. Baba Guru Nanak, the founder of Sikhism, created the first municipality in 1504. This place is significant to the Sikhs. Prime Minister Imran Khan launched this corridor to address the Sikh populations between India and Pakistan on 9 November 2019. The Sikhs coming from India are therefore permitted to enter Kartarpur visa-free. They can even stay here with the motel facilities.

Kartarpur gurudwara currently expands on 330 hectares, including 10 hectares for the gurudwara complex and 36 hectares for greenery. This extensive gurudwara has been renovated. It is also situated in a rectangular position with a mid-high gallery with rooms for pilgrims. 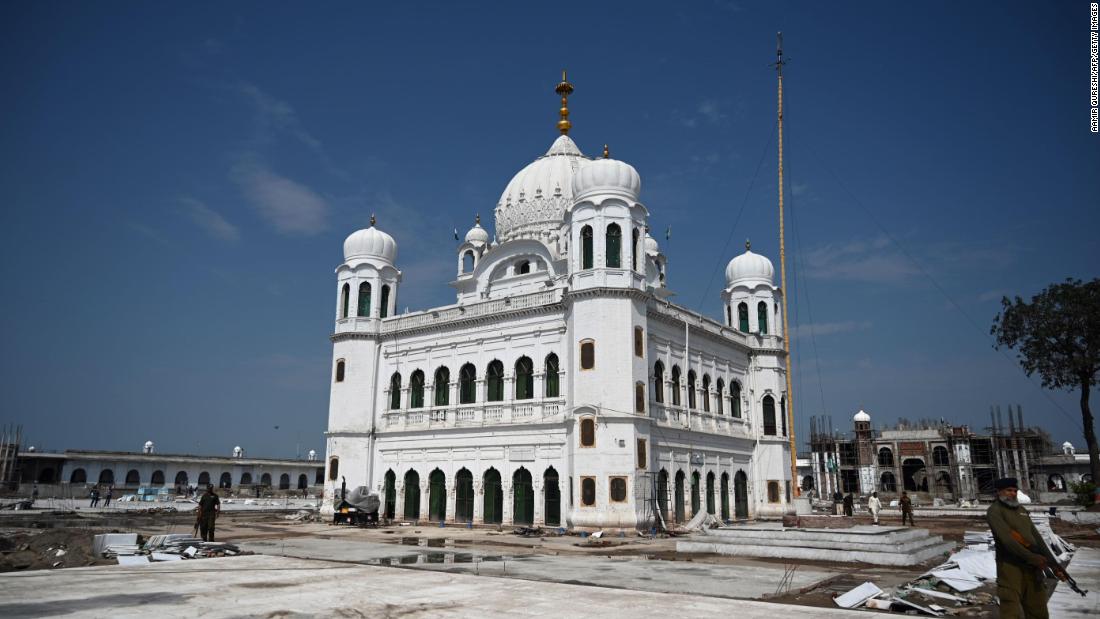 The whole property is unroofed other than the central dome room in the patio. There are four entry points below the four couples; the white marbled-gurudwara has a complex arcade design. The complex patterns of creation are like Bengali architecture. Except for the chambers, in the gurudwara, there are no photos of Baba Guru Nanak.

It is in Hassan abdal, in Punjab. This gurudwara has been founded. It is known, as the name says, by Guru Nanak's handprint. Hari Singh Nalwa, a prominent general of the Sikh and the first gurudwara was supposed to have built the Panja Sahib. It is a holy place in Sikhism after the Golden Temple in India, after Nankana Sahib in Sheikhupura. Sikhs from around the globe flock here throughout April to celebrate the Khalsa birth, purity.

This gurudwara is rather tiny and has the same characteristics, except its boundary wall and the main hull. The gurudwara domes are white, too, while red bricks are on the walls and high platforms. The main courtyard features a marble flooring of white and burgundy. The square orientation of this gurudwara is based, and just one entry remains functional.

This is in Eminabad, approximately 15 km. This is supposed to be the place of refuge for Guru Nanak. Rory is a gallery with three stories with an inverted lotus dome on four sides. It's a red-brick gurudwara with the main house. It's the entryway, although the gurudwara opens on the left-hand side of a rectangular terrace.

The far end of the gurudwara has a lotus dome and a large circular porch. In the green, open terrain, the gurudwara was noted for its Baisakhi celebrations, particularly in the pre-partition zone.

In Lahore, near the historic Badshahi Mosque, gurudwara Dera Sahib is situated inside the Roshnai Ports. This is where the fifth Sikhist Guru Guru Arjan Dev, sank into the Ravi River during the Mughal dynasty. During the Red Fort. The local Sikhs manage this gurudwara in the area.

The gurudwara lies directly next to the Badshahi mosque. The white marble ghetto with gold domes disrupts the uniformity of the Mughal architecture in this area against the red-brick houses of the Mughal region. The fortified entryway wall stands at an elevation and is high enough to protect the interior thoroughly. The center gold dome is the only item that can be seen behind the tall, white columns. This is where marble carvings and a portrait of Baba Guru Nanak have been thoroughly sculpted.