As soon as you hear about electric buses then developed countries like the UK and Japan pops up in your mind. However, the Government of Pakistan is planning to turn Pakistan into Paris and one step toward changing the whole overlook of this country by introducing Electric Bus Service Islamabad.

What will be the Routes of Electric Bus Service Islamabad ?

When will Electric Buses Start Working in Islamabad?

Yes, we all know that this capital city already has a metro bus, but this transportation is certainly not good enough to meet the growing demand of this city. Metro bus covers only one route. What about commutes from other routes? So, the government has decided to add a bit of comfort to the life of those people. Work on this new development project of Pakistan will kickstart by December 2020. (Inshallah). Let’s start digging into complete details.

What will be the Routes of Electric Bus Service Islamabad ?

According to the latest plan unlocked by the government, there will be a total of 30 buses in the first part of this plan. These fully air-conditioned buses will provide room to around 48000 commutes daily. These 30 buses will provide services for six routes: from Bhara Kahu to Marghazar Zoo (via Dhokri and F-6); from Rawat to Faisal Mosque; Tarnol to F-9 Park; GT Road (close to the Railway Carriage Factory) to IJ Principal Road metro station; Nilor Chowk to Koral Chowk and Lehtrar Chowk to Aabpara.

First of all, it would be the first time in history that electric buses will go operational in any city of Pakistan. This facility is available around the world only in developed countries. So, it won’t be wrong to feel good about this new development project. Have a look at payment plan of Eighteen Islamabad.

According to authorities, one main reason to introduce electric buses in Islamabad is to take an environment-friendly approach. The air quality of Islamabad is deteriorating day by day, and it’s all because of diesel- and petrol-based vehicles. 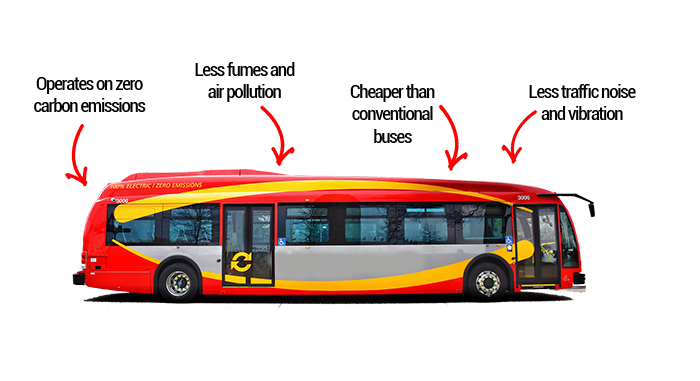 According to the Chairman of Capital Development Authority – Amir Ali, Government will introduce modern buses in the capital. This environment-friendly transportation will reduce air pollution and carbon emission as it will ultimately run on electricity.

Electric vehicles have zero percent carbon emission. That’s why they are regarded as the best environment-friendly alternative to diesel vehicles.

Know: Why to Embrace Minmalist Home Decor and Design?

Another primary reason for introducing this mega-development project is to drop down operational costs. Electric Buses have 30 percent low-maintenance cost as compared to diesel vehicles. The government can save almost 30,0000 barrels of fuels and PKR 500 million every year with this transition.

When you dig down in the population figure of Capital City, you will surprise to know that in one decade it has increased from 800,000 to more than two million. At this point, there is no federal transport facility for commuters, expect Islamabad Metro bus service- which caters only one route.

Through this development project, the government is trying to meet the long-standing demand of residents of this city for public bus service.

Not everyone can afford private transport. Thus there is an immense need for public transport. If the government introduces this plan, they commuter will prefer electric buses over their vehicles as they would be able to save their money and time via this preference.

Should you Invest in Skypark One Gulberg Islamabad? Find out

When will Electric Buses Start Working in Islamabad?

According to Amir Ali, in upcoming weeks, this plan will be presented to the government, and once it gets the green signal, then you would be able to see electric buses on the roads in the coming three to five months.

CDA has a complete model of electric buses where first they will acquire the required fleet and then move with its security surveillance, IT services, and AFC system. This service requires a command and control center- thus, there is a need to construct allied infrastructure. According to the official, the operational and maintenance of electric bus services will be outsourced to four contractors.

As far as Capital and Operational costs of the Islamabad Electric bus service are concerned, authorities estimated that there would be RS.273.32 million deficit annually. Thus, this plan requires the cooperation and support from the Economic Affairs Division (EAD).

As a Pakistani, we want our country to prosper, and when government officials come up with the best development plans like Electric buses in Islamabad, then you feel that soon our country will move from a list of developing countries. Indeed, there is a deficit involved with this plan, but one must see a big picture- where more than 50,000 people can take advantage of this facility. What do you think about this new development project of CDA?